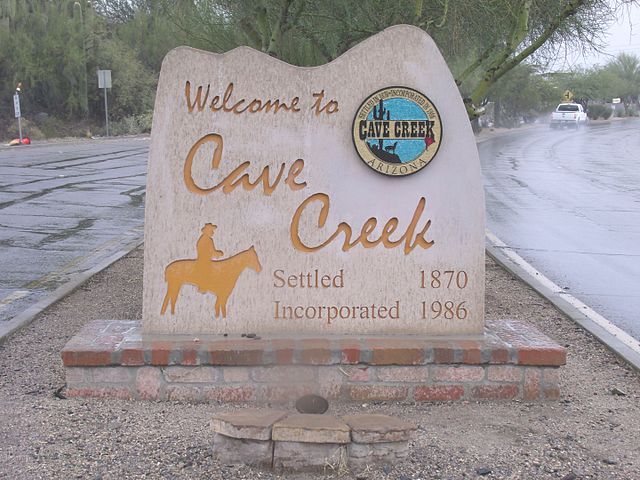 Cave Creek is a town in Maricopa County bordering Phoenix but one of the smallest communities in the Phoenix Metro area. This small suburb is home to less than 6000 residents and is located on the northeast border of the Phoenix area just south of the Jewel of the Creek Preserve, just a few minutes off of Interstate 17. It borders Carefree, the Phoenix Sonoran Preserve, in the small community of Anthem.

Read on below the listings to learn more about relocating to Cave Creek and what it's like to live here.

Included below are homes for sale in Cave Creek. If you would like more information on any of these Cave Creek real estate listings, just click the "Request More Information" button when viewing the details of that property. We can provide you with disclosures, past sales history, dates and prices of homes recently sold nearby, and more.

And, if you haven't already, be sure to register for a free account so that you can receive email alerts whenever new Cave Creek listings come on the market. 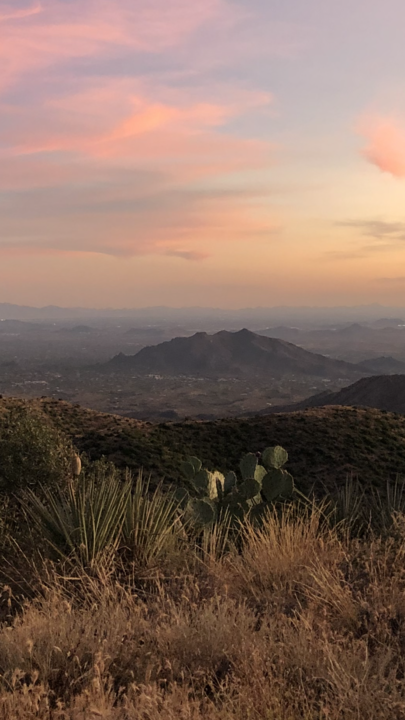 Planning a move to the Phoenix Metro area? Cave Creek might be ideal. If you're looking at relocating to our area, let me introduce you to this beautiful little patch of land just north of downtown Phoenix and Scottsdale.

Originally settled in 1870 by soldiers on horseback from Fort McDowell, the town is named for the cave that's next to the creek the town was founded on. Prospectors from the Bradshaw mountains found gold in the town and, while it's not nearly as big as its neighboring communities and towns, it has managed to hang on to its old-world charm. Nestled in the Sonoran Desert, the town is only about 28 mi.² adjacent to Carefree and shares a local landmark Black Mountain with the other town. There are two notable streams through Cave Creek, one flowing to the town and into Phoenix the other is in the Chiricahua Mountains, about 200 miles to the southeast. In 2000, Maricopa County and the town of Cave Creek but Spur Cross Ranch, and over 2100 acre tract of Sonoran Desert just north of Phoenix with its unusual cacti, stone formations, and hundreds of prehistory Hohokam Indian tribal artifacts. Today, it's now the Maricopa County Park.

Of course, you are moving to Arizona so you naturally expect a little bit of heat, right? Our hot season lasts for about six months from the end of May to the end of September with daily high temperatures between 95 and 110°. Our hot estate is right around July 3 with an average of 115°. Our cool season lasts from November to March with daily high temperatures below 69°. Our typical coldest day of the year is December 27 with an average low of 41°… Really cooling off around here!

Cave Creek has several historical properties located at the Cave Creek Museum inside the Tubercular Cabin listed on the National Register of Historic Places. Two of these historic properties have been converted into restaurants, the Cave Creek Inn and the Cave Creek Service Station (Big Earl's Greasy Eats). The inn is a fantastic lodging for natural history enthusiasts and perfect for weddings and retreats, covering over seven secluded acres alongside the actual Cave Creek with beautiful views of the cliffs and canyon.

What is Cave Creek Known For?

Cave Creek is probably best known for its expansive nearly 3000-acre park located in the upper Sonoran desert. This undisturbed natural oasis provides over 10 miles of trails, over 50 picnic areas, over 40 campsites, and sweeping, stunning views of the desert in every direction.

Cave Creek has its own Unified School District but a small portion on the west of the city is served by the Dear Valley Unified School District. Within the Cave Creek school district there are five elementary schools, one middle school, and one high school. There's also a developmental preschool, child's play preschool, and the Academy of Excellence and Desert Sun Academy.

What to Know About Cave Creek Before Moving Here

Before making the move to Cave Creek there are a few things to know about our charming little community. There are two different parts of town. There is the "Town Core" covering anything north of Carefree Highway, and everything south of Carefree Highway or west of Cave Creek Road. The town core has saloons, custom homes, and a few shops while the cells and has major commercial shops like Walmart, Sprouts, and newer tract homes with custom homes and equestrian properties in the Desert Hills area. While Carefree is its own little town, it's often referred to as part of Cave Creek since they run together quite often.

Internet might be a challenge. Those in the cells of the highway area have high-speed Internet but towards the Town Core, it's important to do your research if you need Internet with a high-speed situation. Desert iNet can deliver service in this area but storms can often make it more difficult. So this is important to know before you choose where to live.

Understanding the fire department. Cave Creek taxes don't actually pay for fire department protection. Each homeowner or the homeowners Association independently contracts to Rural Metro Fire. But don't worry, if for, God forbid, there is a fire at your house, they still will come out and save your home, but you may receive a bill for it. This is a basic layer of insurance and because Cave Creek's property taxes are lower than neighboring Scottsdale, it's about even.

Wildlife is a little more frequent here. Because we're a little farther out from downtown and the Metro area, you're going to see a lot more wildlife. The closer you are to Spur Cross Ranch you might see snakes, deer, wild turkey, elk, bear, and even a mountain lion from time to time. Remember, we're a little more remote out here and we enjoy our view and all the comes with it.

There's real estate all over Cave Creek and whether it's a gated community, newer construction home, established historical home, condominium, or duplex, there are lots of choices in the Cave Creek real estate market. You'll find homes starting at $180,000 up to over $4 million for luxury estates and equestrian property with acreage. 89% of Cave Creek residents own their own homes. The median home value is about $485,000 with the median rent of about $1400. Most of the real estate sits on the east side of Cave Creek due to the conservation areas and regional parks in the middle. For more information on homes for sale in Cave Creek Arizona, browse active listings above or simply contact our office at any time to schedule a showing. 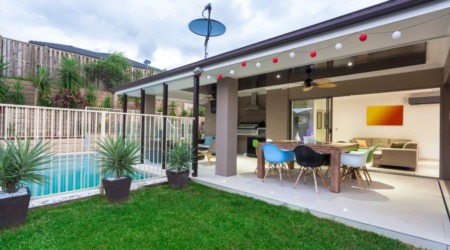 Reaping The Benefits Of A Peaceful Backyard Oasis 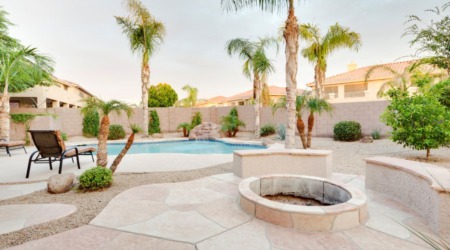